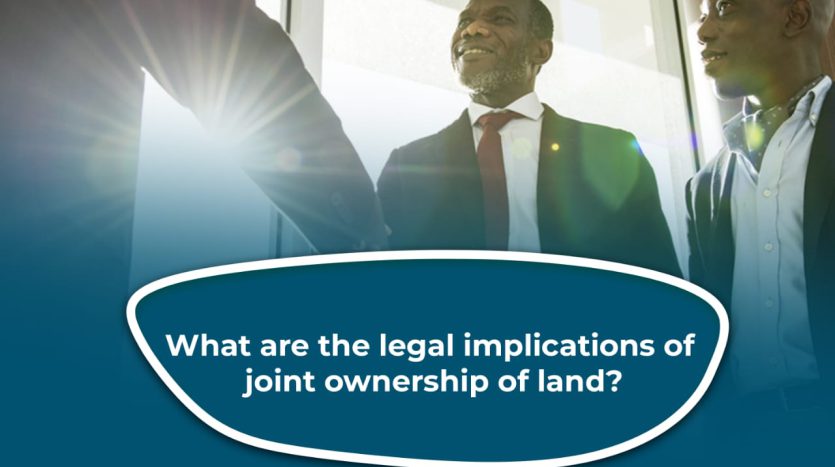 What are the legal implications of Joint ownership of land

Simply put, joint ownership of land refers to when two or more persons jointly possess landed property. Any profit, claim, or right regarding that plot of land belongs to the owners collectively, not individually.

A land that is owned jointly by a husband and wife, a father and daughter, a mother and son, a sister and brother, or business partners 1 and 2 is an example of this.

According to this, “One person cannot sell or otherwise dispose of the land without the other person’s approval.” For instance, even when a husband and wife are no longer together and have divorced, if they have owned a piece of property together neither one of them may sell the property without the other’s permission.

Without the approval of the other spouse in the marriage, anybody who purchases the land sold by either the husband or wife has bought a defective asset that the courts may reject and revoke. It is crucial to keep in mind that neither of the parties who jointly own the land is permitted to sell it without the other’s approval.

Joint ownership of property by a person or group of people has the following legal implications:

How may a joint owned land be purchased?

The approval of all joint owners is required before you may acquire land that is jointly owned by two or more parties. The sale is invalidated if that permission is not obtained.

When a buyer of land purchases from a joint owner without the approval of the others, he has effectively purchased nothing, and the title is VERY flawed in every way. Nemo dat quod non habet, which literally translates to “you cannot give what you do not have,” applies here since it violates the legal norm.

The same rule also holds true for any alterations made to jointly held property. As a result, if one of the owners, for instance, constructs a home on the property, he cannot sell the building by himself because he constructed it entirely by himself.

How does the development at Lekki deep port affect land in Ibeju Lekki
Top reason to avoid Omo-onile: Signing fees