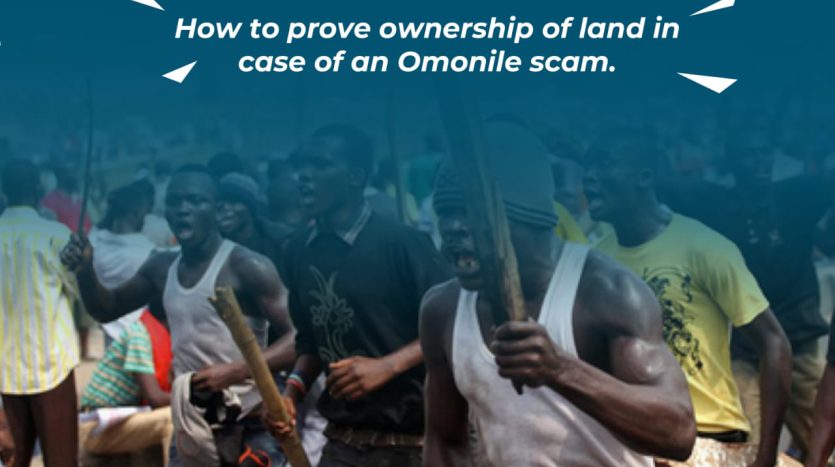 How to prove ownership of land in case of an Omonile scam.

You may have been scammed out of the millions of naira worth of land you purchased, or you may have just learned that it has been sold to two or more people, or the documents you possess pertaining to the title to that land have been found to be false or fraudulent, or you may have neglected your land after you purchased it, and the day you go to clear the grass, you discover that someone else has begun work on the foundation, or you may have even purchased land legally and without a contract.

In other words, you’ve all heard these kinds of tales, either firsthand or from family, friends, or coworkers, and the majority of them have either given up or abandoned the land to forego the millions spent to purchase it, and they’ve quietly moved on to reflect on their losses and lose faith in buying land. It shouldn’t be this way though, as this essay will highlight some of your legal options if problems like these happen.

You must first verify yourself and the documents you have as proof of ownership to see whether you have the following right documents to support your case before bringing that issue up with the police station or attempting to go to court over the trespass on your property by a Usurper. Here are the basic documents you need to verify:

An Omonile Family Receipt detailing the name of the family, the date the property was purchased, the location of the piece of land, the purchase price, and the family’s known address, signed by the accredited family head and attested by the family secretary and principal member

A Valid Survey Plan showing all the Beacon Numbers, the Survey Plan number, the name of the Surveyor who surveyed it, the Year it was Surveyed including proof of Lodgment of the Red copy at the Survey-General’s office.

Mode of Payment both through a Bank Check or Draft and including witness to the Transaction.

This is the Position of the Law that was established in The Supreme Court Case in 2009 where it was stated that one of the ways to prove ownership of title to land is by Production of Documents of Title.

What this means is that for you to prove that you have a better title over the person claiming ownership of the same land, you must have a lot of Documents to boost your claim of Ownership of that land better than the other person.

How much of your salary should go to your rent?
Want to sell your properties fast? Read this