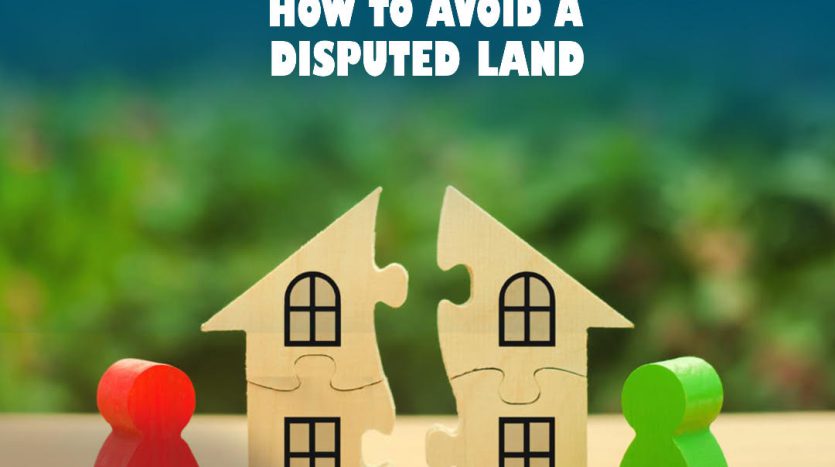 How to avoid a disputed land

While real estate investing may be a life-changing experience, it can also be a terrible experience if you put your trust in the wrong people. Purchasing land that is in dispute is a mistake you cannot afford to make. Today, we’ll go through what you need to do to prevent those sorts of property, but first, let’s clarify what land under dispute means:

This type of land is designated as “Lis pendis,” which means there is pending litigation on the property and the subject matter has yet to be established. These sorts of lands are a no-no since the ownership of the property is still being determined, which means you might end up buying it from the wrong person.

It might be simple or difficult to locate a parcel of property that is the subject of a lawsuit. It’s simple in the sense that if the property is fenced, the suit number of the lawsuit will be openly printed on the fence; but, if the land is not fenced, determining if it’s under litigation becomes a difficult process.

This is a fairly prevalent problem among customary landowners. Several families frequently claim ownership of a large piece of property, especially when concerns of land invasion have been proven. These sorts of properties are extremely risky to buy since any problems with the property will be passed on to the unsuspecting buyer. Similarly, territories with community fights should be avoided; these regions frequently contain one or two communities warring over territorial limits.

Lands that are subject to government acquisition

Purchasing land that is subject to government acquisition will almost surely result in future problems. To ensure one’s peace of mind, it is best to avoid certain types of areas.

Lands sold to more than one person

Land with development on them

When attempting to purchase land from customary landowners, keep an eye out for signs of development or evidence that the land has been taken over by a third party. When this is discovered, it is best to avoid such land since it is apparent that the sellers are attempting to sell land that has already been sold to a third party. If the sellers claim that the development was done by them, stay away since it is quite rare for traditional landowners to begin building a fence or corner piece on their property.

How to avoid buying these types of land

The solution is straightforward: purchase land from a reputable real estate developer such as Danbel Properties and Investments Limited. We’ve taken the effort to do numerous types of verification on our estates to verify that they’re free of disputes.