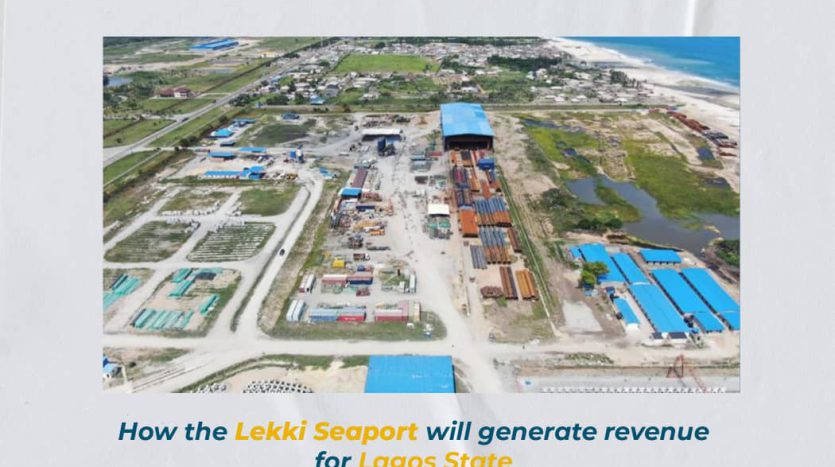 How Lekki Seaport will generate revenue for Lagos

In a few months, Nigeria will roll out one of its new golden geese, the Lekki Seaport – a $1.5 billion port facility situated at the Lagos Free Trade Zone (LFZ), along the Lekki Corridor. The Lekki Port project commenced in 2021 following a $629 million loan financing agreement, signed earlier, in Oct. 2019, between the Lekki Port LFTZ Enterprise Limited (LPLEL) and China Development Bank (CDB). A consortium of banks also contributed to funding the project.

Although developers have slated the completion for the final quarter of 2022, a recent report by The Sun News indicates that the project is about 80 per cent completed. While the country anticipates the completion of this notable project, the host state anticipates significant earnings and job creation for its residents.

Last year, Nigerian Port Authorities (NPA) reported that despite the impact of the COVID-19 pandemic, its Internally Generated Revenue (IGR) grew significantly by 120 per cent between Jan. 1 and Sept. 2021. During a presentation to the Nigerian government, Mohammed Bello Koko, the Acting Managing Director of NPA, mentioned that the agency earned N256.28 billion ($619.62 million) in IGR as of the end of Sept. 2021, exceeding an initial projection. However, when completed, the federal government and the Lagos State governments expect to earn at least $201 billion in taxes, royalties, and duties from the Lekki deep seaport in Lagos.

Opportunities the new Lekki seaport could create for Lagos

In 2019, Business A.M reported Biodun Dabiri, chairman of Lekki Port Board of Directors, saying the port project would create over 200,000 jobs. In a state of over 20 million people with an influx of internal migrants and high unemployment, the project will increase the state’s earnings from personal income tax. It will also create job opportunities given its location at the LFZ- a region strategically developed to unlock economic opportunities for Nigeria by attracting foreign direct investment (FDI).

Furthermore, the new seaport will complement the gigantic Dangote oil refinery and the Lekki International Airport (in view). This would cause the emergence of a Harbour City with direct international flights and an integrated transport network of roads, rail and bridges.

When completed, the Lekki deep seaport will have the capacity to accommodate the top-rated “ultra-large” ships able to transport more than 14,500 containers. The completion of the project will trigger massive economic activities within the seaport and its environs.

There is still time for investors who have yet to purchase land in Ibeju Lekki and Epe to do so before the impending boom. Why not call us right now to get started on your purchase?