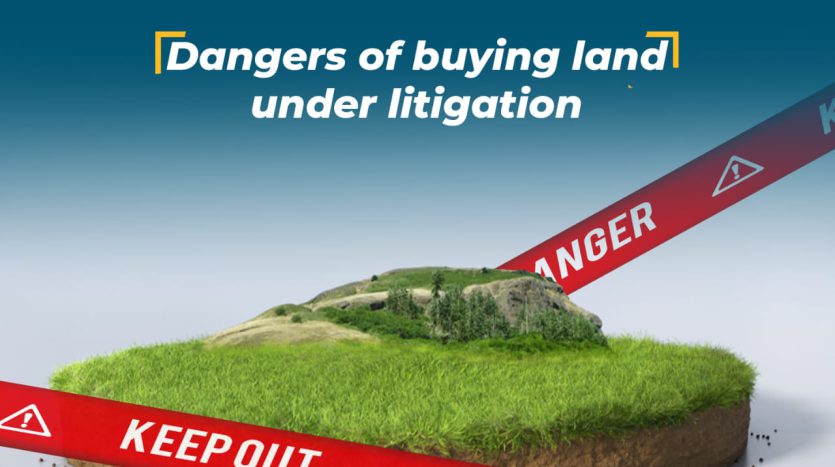 Dangers of buying land under litigation

When you do locate a piece of property in which you actually have an interest, it is crucial that you get it inspected. The term “inspection” in this context refers to checking the land physically for physical flaws as well as checking it at various registers to find hidden flaws, also known as encumbrances on the land, which the seller would typically not reveal to the buyer.

There are cases where the property is so mired in controversies that the disputing parties, for one reason or another, turn their claims into a legal war. The scenario gets worse if the property is owned by a family and several branches of the family want to make quick money by selling their land without first informing all of the family members.

The important question to ask right now is: How can we avoid purchasing property that is the subject of a lawsuit?

What precautions must we take?

Any land that is the subject of an active legal dispute is referred to as “land under litigation.” However, the lawsuit may have been the result of a disagreement between two persons who each claimed ownership of the subject land. This would often leave a prospective buyer subject to the regrettable outcome of losing the stated property and the money paid if the person who sold the land to him was not the beneficiary of the court’s verdict.

You must conduct a search at the court registry to find out whether a piece of property has been the subject of court litigation or not to find out if a lawsuit is currently pending, a judgement has been rendered in the owner’s favour legally, a consent judgement has been entered between disputing parties based on their terms of settlement, or an appeal has been filed against the judgement.

The owner of the land or property may sometimes have passed away intestate (without a Will) or testate (with a Will). Who owns what may be a point of controversy for the administrators, beneficiaries, and executors of the Will and Letters of Administration, respectively. To determine whether or not probate has been awarded and who is just involved in this case, it is preferable to do a search at the probate registry located on court grounds. If a will is challenged, you must go back to the court registry to find out how it turned out.

The phrase “caveat emptor,” which translates to “let the buyer beware,” is occasionally used for properties that are the subject of legal disputes. Once more, before making a purchase, the buyer must make sure that he confirms all pertinent information about the property. You may be surprised to learn that some dishonest land speculators will repaint the fences of these properties that have been marked as being subject to litigation with bright colours. Unless you take the necessary precautions, it will be difficult to determine whether you are purchasing a property free from litigation once the buyer has made the payment without defending himself with the necessary information. He is not entitled to a return under equity for any flaws in the property that he should have known about before making the acquisition.

In the course of conducting search at the land registry, a certificate of occupancy and a registered deed of assignment if in existence would disclose some certain facts about the existing interest the owner has on the land. This will help to disclose if there is an un-discharged mortgage transaction or it has been previously assigned to another person and the documents you were given are fake copies.

Is a half plot of land big enough for me?
Tips used by top realtors to always close that deal